A letter from Charles Fort

Charles Fort, born August 6, 1874, was a librarian of bizarre phenomenon in such books as The Book of the Damned and Wild Talents. He said of himself, "I am a collector of notes upon subjects that have diversity — such as deviations from concentricity in the lunar crater Copernicus, and a sudden appearance of purple Englishmen — stationary meteor-radiants, and a reported growth of hair on the bald head of a mummy — and 'Did the girl swallow the octopus?'"

And, concerning his research: "[Wise men] have tried to understand our state of being, by grasping at its stars, or its arts, or its economics. But, if there is an underlying oneness of all things, it does not matter where we begin, whether with stars, or laws of supply and demand, or frogs, or Napoleon Bonaparte. One measures a circle, beginning anywhere."

His books make fascinating reading, and while he can be flippant at times ("I think we're all bugs and mice, and are only different expressions of an all-inclusive cheese"), the letter below indicates he did take his work seriously. John found it and the envelope it came in glued to the inside of the back cover of a third printing (Feb. 1931) of The Book of the Damned he purchased some years ago at a used book store for $4. 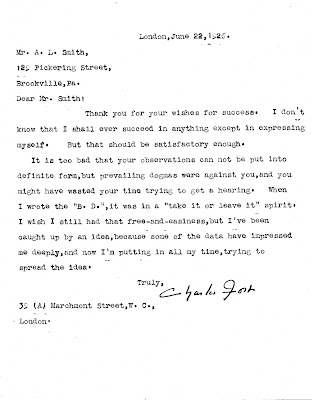 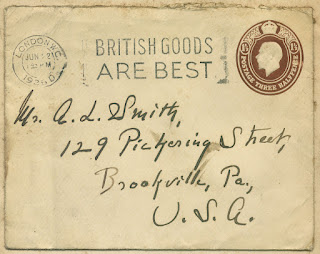