A Walk In The Fog

Saturday night, two A.M.—a dense fog envelops our street. John steps out the front door and snaps time exposures of the swirling mist curling along the sidewalk and empty road. I think our trash bin at the curb is spoiling the shots and scurry out in my pajamas and slippers to move it. He continues taking pictures, including some of me pulling the trash bin up to the side of the house. Would I mind walking up the front lawn to the door and back down to the curb? How about strolling back and forth along the sidewalk a few times? A little bit faster. A little bit slower. A hundred shots later, he has what he wants—a ghostly figure, some thing, perhaps an alien being, out-of-synch with time and space, moving under a halo of light and mist from the corner streetlight set against the firm reality of tree, sidewalk, and roadway. Phenomenal.

The fog affects sounds, too. When John goes indoors to make his digital magic, I am the only ear-witness to an argument two streets over. A car door slamming down the block seems to come from our own driveway. Unsettling. The ambient noise of a party on the corner five houses away reaches me—soft music, laughter and cussing, the clinking and breaking of glass, the low murmur of conversation. The partiers are no louder than usual and would not be disturbing the calm of our quiet little street at all if not for the sound-bending properties of the fog. I cannot make out what the joke is that the girl with the velvet voice finds so funny, or why the man with the gravel in his throat abruptly shouts “Hey!” but because of the fog I share the warmth of her laughter, the surprise at his sudden outburst.

I notice more sounds because of the fog, too. The engineer of an early-morning train blasts through an intersection miles away and lays on the horn; usually we can’t hear this train here in suburbia, only when we’re at Eagle Creek stargazing. The displaced sound of a train through fog is different from the same sound skipped across the surface of the reservoir: the horn tonight is warmer, less melancholy. Planes from Stout Field start their nightly maneuvers, and their roar echoes closer to the ground this eerie morning.

I run into the house and grab coat, hat, gloves, and digital recorder and stand at the foot of our driveway hoping to catch all the sounds that normally stop much closer to their sources—the party down the street, the train miles away, the planes high overhead. John is also a “noisician,” manipulating audio layers as well as he does visual ones. His complex sound sculptures make fascinating listening, and I trust our professional-grade hand-held to capture some of the strange twists, turns, and curves of sound in fog. I am in luck—the sounds repeat for me, and I am an audience of one, a lone sentinel witnessing these ephemeral events.

The heightened audio awareness caused by the fog stimulates me as a writer. The noise-level of the party on the corner rises and falls in a natural rhythm and my imagination fills in words, plots, and relationships from the intonations I can’t completely decipher. Later the angry slam of the car door, the haunting loneliness of the late-train, even the perception-altering experience of listening in the fog itself will find their way into my stories.

At no time do I feel I’m in any danger, a woman in her pajamas standing by herself outdoors at two o’clock in the morning. The fog protects me from harm as well as discovery. I record for some forty-five minutes, and when the cold creeps into my toes I reluctantly leave my post for the warmth of indoors. With the fog swirling around me, morphing sight and sound into strange shapes and resonances, I am that blurry figure so eerily captured by the artist’s camera. 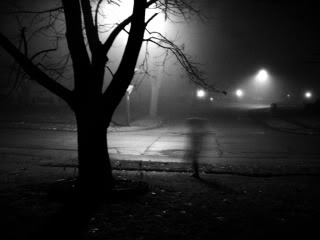