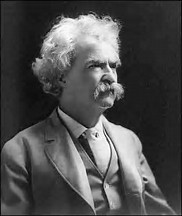 Mark Twain had three rules for writing. The first was “Write,” the second was “Write,” and the third was “Write.” Here are some more of my favorite quotes about the craft:

There are three rules for the writing of a novel. Unfortunately, no one knows what they are.—W. Somerset Maugham

The most valuable of all talents is that of never using two words when one will do.—Thomas Jefferson

The letter I have written today is longer than usual because I lacked the time to make it shorter.—Blaise Pascal

Broadly speaking, the short words are the best, and the old words when short are best of all.—Winston Churchill

Everywhere I go I'm asked if I think the university stifles writers. My opinion is that they don't stifle enough of them.—Flannery O'Connor

The wastepaper basket is the writer's best friend.—Isaac Bashevis Singer

I believe more in the scissors than I do in the pencil.—Truman Capote

Don’t try to be different. Just be good. To be good is different enough.—Arthur Freed