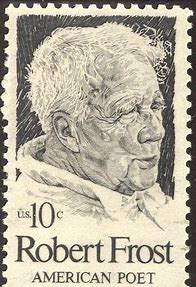 A bank is a place where they lend you an umbrella in fair weather and ask for it back when it begins to rain.

A diplomat is a man who always remembers a woman’s birthday but never remembers her age.
By working faithfully eight hours a day you may eventually get to be boss and work twelve hours a day.

Don't ever take a fence down until you know why it was put up.
Home is the place where, when you have to go there, they have to take you in.
If society fits you comfortably enough, you call it freedom.
In three words I can sum up everything I’ve learned about life: it goes on.
Forgive, O Lord, my little jokes on Thee, and I'll forgive Thy great big joke on me.
I'm not confused. I'm just well-mixed.
A liberal is a man too broadminded to take his own side in a quarrel.
Half the world is composed of people who have something to say and can't, and the other half who have nothing to say and keep on saying it.
Education is the ability to listen to almost anything without losing your temper or your self-confidence.
I had a lover’s quarrel with the world.
Poetry is when an emotion has found its thought and the thought has found words.
The reason why worry kills more people than work is that more people worry than work.
The ear is the only true writer and only true reader.
The best way out is always through.