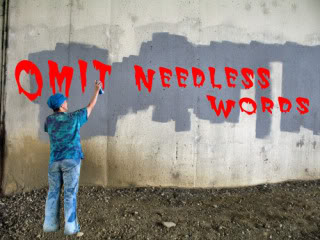 If you’re driving in Indianapolis on Guion Road, rubberneck to the west as you go under the 38th St. overpass and you won’t see this graffiti—it’s a digital composite. I didn’t really want to get shot defacing some banger’s logo. The spirit was willing even if the flesh was prudent.

I’ve always envisioned Professor Strunk standing before his English 8 class in a rumpled suit, tie askew, hair wild and woolly, pounding his fist on the podium as he hurls Rule Seventeen at his students.

Strunk’s advice is at the top of a poster on the wall in my office (next to the one of Henry Lee Lucas’s Rules for the Successful Serial Killer). Other words of wisdom follow:

Thomas Jefferson: “The most valuable of all talents is that of never using two words when one will do.”

Dr. Johnson: “Read over your compositions, and wherever you meet with a passage which you think is particularly fine, strike it out.”

And that brings me to Henry Lee’s rules, the simplicity of which I think Strunk would approve:

1. Don’t kill anybody you know. (HLL eventually got caught when he ignored this cardinal rule.)
2. Don’t use the same M.O. twice.
3. Keep moving. Do your next one miles away, in a different jurisdiction.
4. Don’t use the same weapon twice. Dispose of it. You can always score another one.
5. Ditto for your vehicles.